The recreation of the modern frigate Shtandart is a story of realising a dream, a symbol of determination and total commitment to one’s goal.

Rebuilding the replica of Peter the Great’s famous ship became possible because of the energy and the spirit of the young generation. It is proof that nothing is ever impossible if you are prepared to act.

The idea of rebuilding Shtandart

The idea of building a replica Shtandart in St-Petersburg came about a long time ago. The choice of the ship was obvious – Shtandart played a crucial part in the history of the Russian Navy. Vladimir Martous was the leader of the new enterprise and adventure. He became its main builder, ideologist and the head of the new Project Shtandart and later – the frigate’s captain. 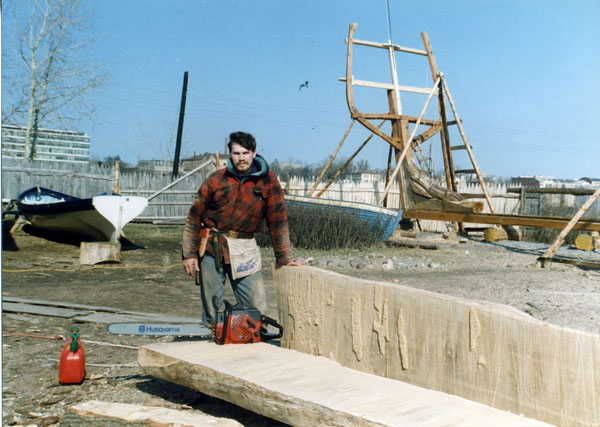 There were no technical drawings left for the original Shtandart, not even in the state archives. So in 1988, a historian Viktor Krainukov was commisioned by the State Hermitage Museum to undertake the 3 year task of collecting all the available information and recreating the appearance of the original Shtandart. Based on his technical drawings a model of Shtandart was built for a museum exposition. 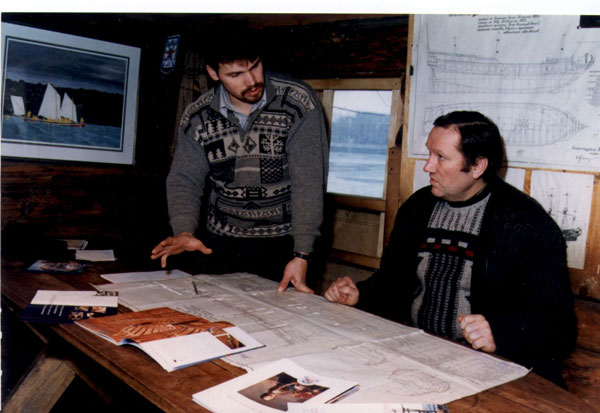 Recreated historical technical drawings were used to produce the designs for the ship, taking into consideration all the modern ship-building requirements. The new Shtandart was to become a fully operational tall-ship, so it had to meet all the modern-day safety and comfort criteria.

On the plans the ship was divided into two areas: the historical part (above the gun deck) and the modern one (in the hold). Storage places for barrels with water, anchor ropes, cannonballs and gunpowder now housed the necessary modern equipment (two Volvo diesel engines, 560 horsepower each, water pumps, tanks etc), the messroom, galley and crew’s accommodation. Everything above the gun deck was true to its original design: masts and topmasts, rigging, capstan winch, cannons, wooden details, helm and the rudder. Staircases and hatches were kept as close as possible to the originals.

The next job was to gather available data on historic shipbuilding, find the means and materials for the project and put together a team. 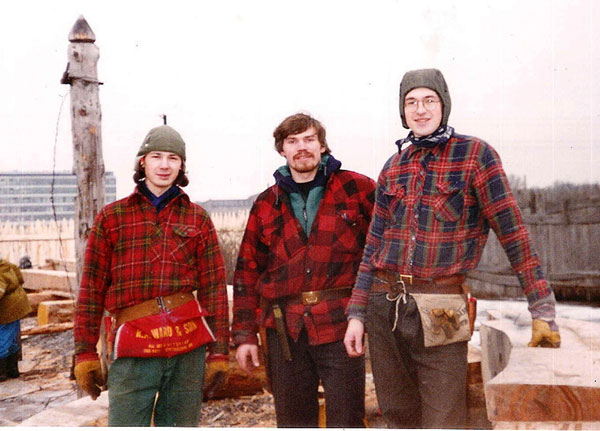 On November 4th, 1994, 298 years since the foundation of the Russian Navy, a modest keel-laying ceremony took place at the shipyard of Shtandart club in Orlovsky Park. 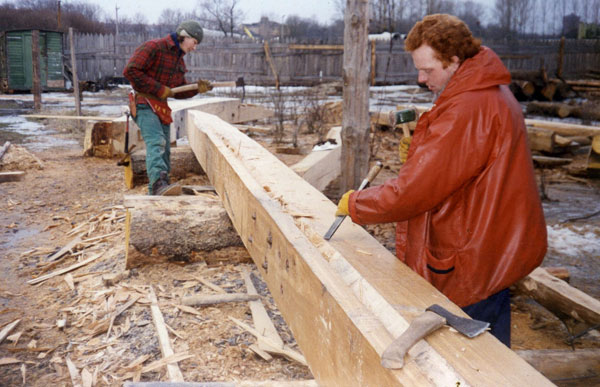 On April 8th, 1995 the first rib was completed and put in place. There was a small celebration and upholding an old Russian tradition the structure (the keel, the stems and the rib) was blessed.

Next year saw a lot of hard and monotonous work – 44 ribs needed to be marked, cut, put together and installed on the keel. 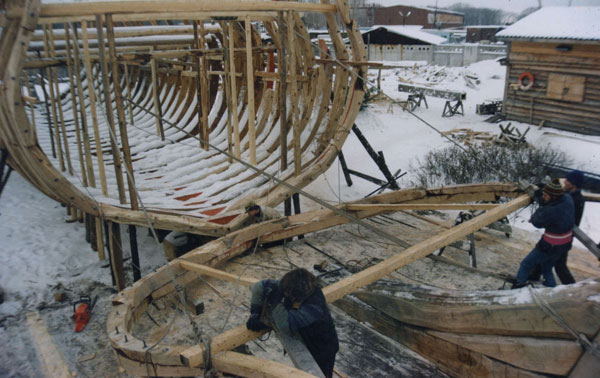 The building team was growing by the month. Mostly young people, having heard about the unusual project from their friends, newspaper articles, radio reports, came to join in. Some came to have a look but stayed to become part of a very interesting and important adventure, attracted by the opportunity to do something worthwhile with their own hands and also by a very friendly atmosphere on site.

And there was plenty of hard work for everyone – felling the trees, turning the logs into half-timber, building and installing the ribs.

Without any machinery all the lifting and transportation at the shipyard had to be done entirely by hand, with the help of self-made devices, just like the ones our forefathers used… 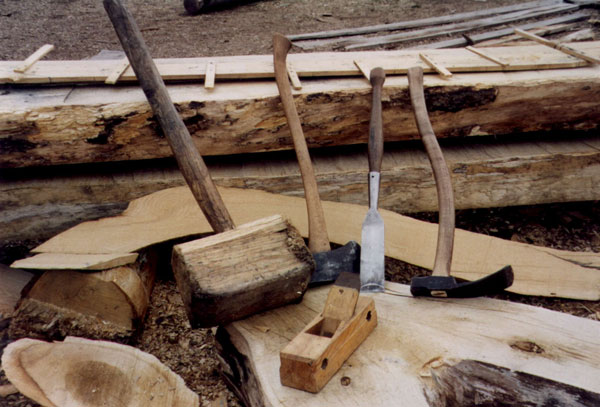 Many things had to be learnt and figured out right there on the spot – trying to think like the shipbuilders of the 18th century. Other techniques came from period books and archives.

By April 1996 the structure began to look like a ship. All the ribs were in place and it was time to start the planking process, for which special 12 meter boards were used (75mm thick and 120mm wide). The bending was also done in a traditional way – the boards needed to be heated for several hours in a special long wooden box, connected to a tank within a furnace (the furnace was built at the shipyard especially for this purpose). After the board reached the necessary temperature, it had to be installed on the ribs within 15 minutes. The quality of the work was crucial – the tightness of the fittings would determine the waterproofing of the frame. 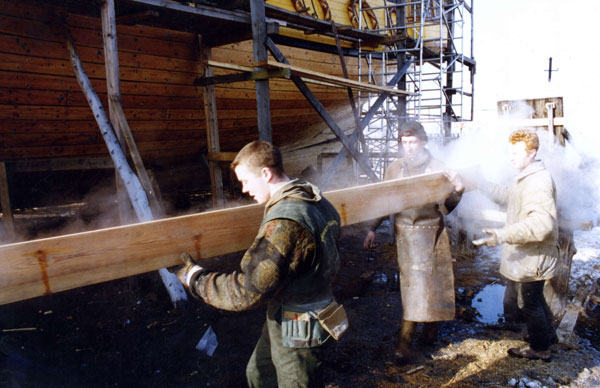 The deeper into construction the more complex technologies had to be used. New workshops were built at the shipyard - a separate smithy to make special nails and metal parts, rigging, sails and carving shops. 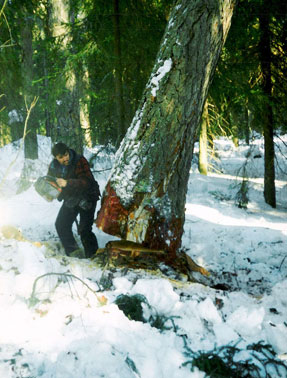 Oak trees were felled by the team in various suburbs and parks – where the forestries identifed trees that were to be cleared.

Larch trees for side-planking came from a forest that Peter the Great ordered to be planted for future ship-building. Larch is the best timber for ships as it does not rot in water. But by the time his larches were ready the Navy did not need timber for their ships anymore… So the forest was turned into a forestry monument and received a status of a nature reserve.

The special permission to fell 30 trees was applied for and granted by the commission from the Academy of Science and the Institute of Forestry Studies. All the trees were felled by team members, using very valuable prior tree felling experience.

The planks were dried in a special chamber with the required temperature and humidity. During the cutting and drying an unusual problem occurred – none of the modern sawmills and drying chambers could cope with 12 meter lengths. So the logs had to be fed into the sawmill and loaded into the drying chamber… manually.

Pine for the masts were spotted in Siverskaya. Organising transportation for 22 meter long timber was a challenge. In the end a special extra long, flat bed truck had to be used. 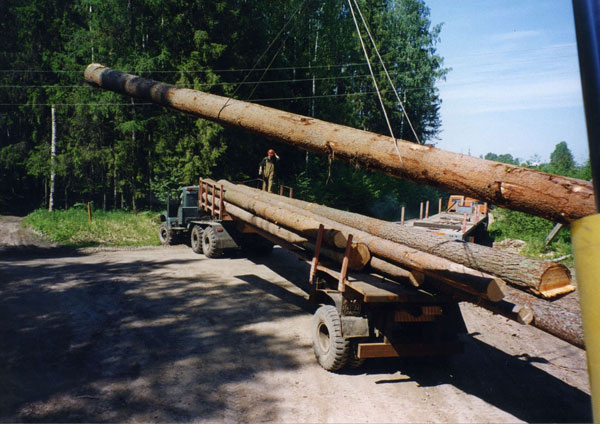 Most of the carvings onboard are made from soft limes, the best timber for carving.

Being the flagship, Shtandart was richly decorated with carvings. The modern Shtandart looked no less beautiful. The stempost is decorated with the lion figurehead – the symbol of power and might. The aft carries the scenes of the first Russian victories at sea. Coat of arms of St-Petersburg is a must. 28 ribboned wreaths decorate the gun ports on both sides. 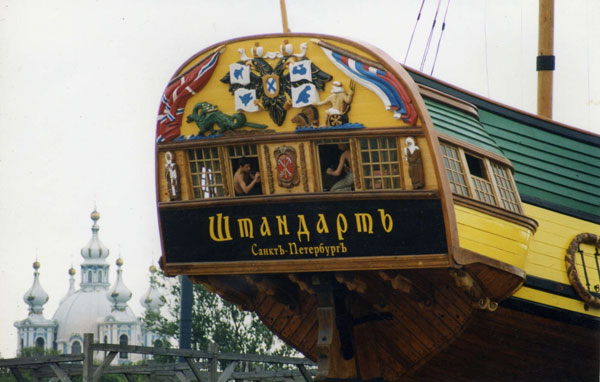 Modern synthetic materials, almost identical in look to the riginals, were used for the sails and rigging. Using authentic materials in this case was not economically viable – hemp rope and linen sailcloth are very difficult to maintain, they rot and disintegrate quickly.

During the first two years the building of the ship was carried out by pure enthusiasm!

Materials and tools were bought with money gained from the sale of a schooner “St-Peter” built by Vladimir Martous previously.

The first sponsor came in 1996 – it was Rodrick Key, the founder of the exhibition company Dolphin Exhibitions. 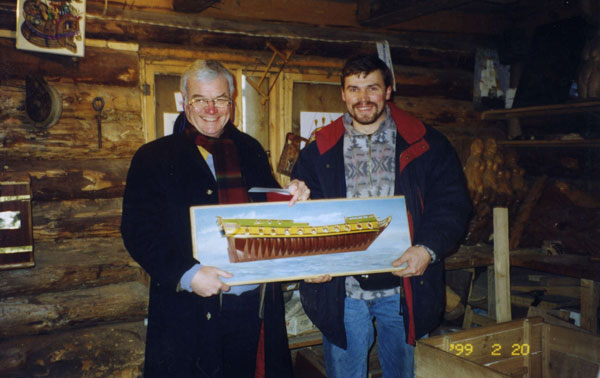 A lot of help came from the governments of Britain and Holland. Both consulates helped to bring in corporate sponsors and charities.

Some offered the money, some – materials and completion of various tasks that were impossible to carry out at a historical shipyard. Akzo-Nobel supplied the paint and coating materials, Volvo gave engines, design engineering company Malachit did the drawings for the shaft line, Baltiysky factory produced the screws and so on. Individuals and charities helped with money.

Shtandart had to match its historical predecessor as closely as possible - for that it needed its cannons to produce the exact atmosphere of a battleship. There was no point in recreating the cast iron cannons and there was no need to put 28 of them onboard.

The modern Shtandart had no intentions of engaging in any military activities and the cannons would have added unnecessary weight! So today Shtandart has 7 cannons, all of which fire just like the real ones regularly during sea battle re-enactments and shows. 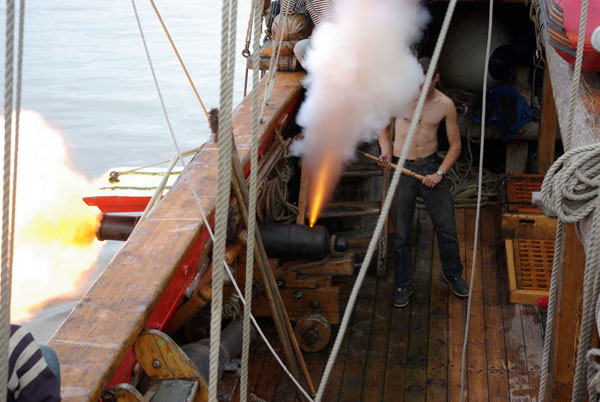 On may 30th, 1998 a special naming ceremony was held. The Governor of St-Peterburg Vladimir Yakovlev and the Duke of York, Prince Andrew, the patrons of the Project, presented the captain of the new Shtandart with the royal standard. 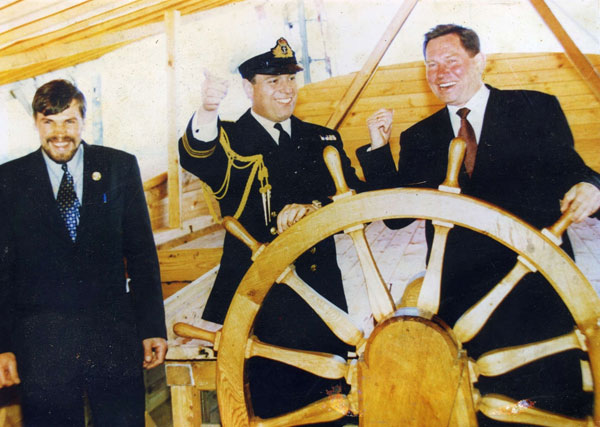 The building of Shtandart took just under six years. During this time the young romantics grew into knowledgeable specialists, professionals and talented craftsmen. The team swapped the amateur for the professional level of working.

Shtandart was officially launched on September 4th, 1999.
Around 40 000 spectators were present. It was an important city event.

Because of on-going construction of the embankment it wasn’t possible to launch the ship in the traditional way, via a slip. Another unorthodox decision had to be found – the ship was put on special carts and moved closer to the river Neva. A huge floating crane lifted the ship, carried her over the future embankment and into water. 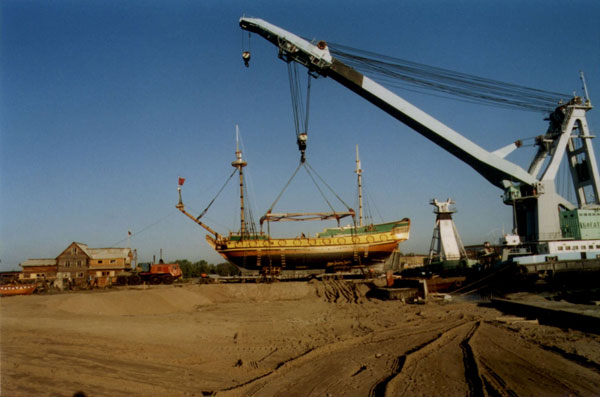 After the launch, work on the ship continued for another year. An 18th century frigate had to be fitted out for 21st century sailing, such as navigation systems, engines, interiors, rigging, furniture and sails… 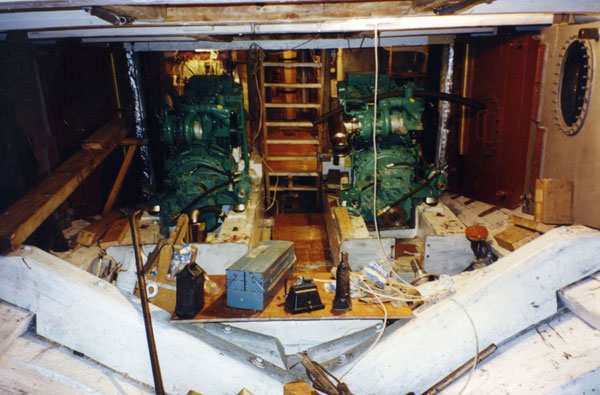 In June 2000 the new Shtandart set sail for the first time. This journey followed the route of the Grand Embassy, visiting the countries, cities and towns where, more than 300 years ago, young Peter learnt the art of shipbuilding in order to create a new, stronger Russia.

Former builders of Shtandart became her first crew, people who for years were building a dream were finally steering a beautiful ship that was made possible with their own hands. 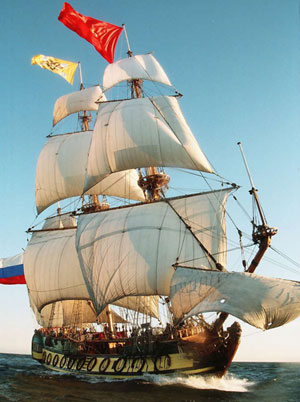