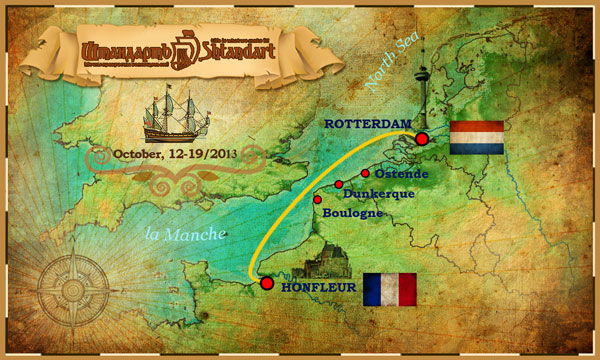 The Dutch city Rotterdam is situated on the North Sea coast in the Rhine river embouchment. It is the biggest commercial harbour in Europe. Recently Rotterdam had had the biggest sales turnover in the world until it was overcome by Shanghai and Singapore in 2002. The Rotterdam port is truly dazzling, both from the land and from the sea. An industrial landscape dominated by giant cranes and flambeau lights stretches forth to the horizon. If you drive — it is easy to get lost in the industrial harbour zone for a long time. If you want to judge the size of Rotterdam port from the sea, you can pay for a boat tour — the view is worth it! 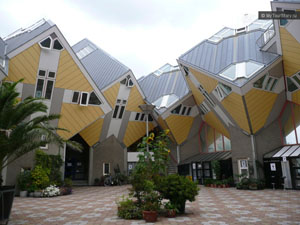 The city itself among very little in Netherlands has suffered very much during the World War II. The historical Rotterdam today consists of just several surviving sections, all the other parts were rebuilt becoming the most architecturally modern city in Netherlands. Skyscrapers with no two alike among them, residence buildings like cubes standing on the corner — Rotterdam might disappoint the "fairy tale" old Netherlands lovers, but it has become a real Mecca for the modern architecture styles fans. Building the new city over the ruins the Dutch weren't scared to experiment implementing the most challenging and innovative ideas.

Rotterdam is probably the most "alive" city in the Netherlands and the most multicultural. The city lives in the rythm given by its port, one can hear almost any language and music style here, taste any cuisine.

Lots of ships come here from all over the world, thousands of sea routes start here. It is hard tyo come up with a more logical, right place to start a big cruise, a real sea adventure. 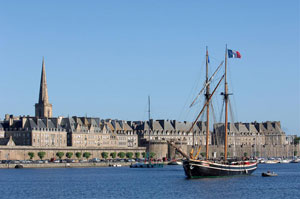 Saint-Malo is a fortress city on the La Manche shore in Brittany that came into being in VI century (and even earlier according to some records) on a small island separated by a narrow strait from the continent.

The fortress safely guarded on all sides gave its owners control over both the shore and the sea routes, so for centuries militant St.Malo inhabitants have collected toll from every passing ship and did not despise freebooting.
Both English and French ships have become local inhabitants' victims - the city did not recognize the supreme authority of the huge European monarchies for rather a long time. It even refused to obey the princes of Brittany who used to have bigger influence in the region.  The medieval motto of Saint-Malo used to be "Not French, not Breton but Malouins" and the city even stood as an independent republic for some time in XV century. 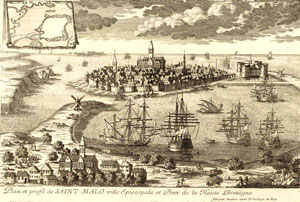 During the Middle Ages the city has been spreading constantly, the fortified island grew together with the continent and by XVI century the city has turned itself into a big commercial port. The massive city walls however leave no doubts in the city's military past. Having started commerce the islanders did not leave their pirate practice so St.Malo became the biggest corsair, smuggler and slave merchant base on the Frenc Atlantic shore soon enough.

This is where the famous corsair of the Napoleon era, one of the first Legion of Honour knights, the "Corsair King" Robert Surcouf was born.

However not only pirates and smugglers have written the history of this city - ther was also a place for a very different kind of adventurers. Alongside Honfleur Saint-Malo has played a very important role in the history of the French geographical discoveries. From the very pier our Shtandart will moor to, the Saint-Malo native Jacques Cartier, the Canada discoverer, has set of in 1534. The legendary Samuel de Champlain also started his late expeditions here. The sailors from Saint-Malo were the ones to discover Falkland islands, still called Iles Malouines in France. An hour-long drive from Saint-Malo will take you to the legendary fortress city Mont Saint-Michel to miss which in our story would have been unforgivable. The fortress of amazing beauty is situated on a small rocky island, more like built into the rock, merging into the cliff. During the high tide the island is completely cut off from the continent and the sea comes up to the steps of the castle. At this moments the castle reminds of a giant ship.

Mont Saint-Michel outline is easily recognised owing it to the spires of the monastery situated on the very top of the clif in the middle of the island. The unique creation of both human art and nature, the castle has inspired people for centuries. It was praised in tha medieval bards' songs, painted by the Renaissance artists, Claude Debussy wrote his music here. Mont Saint-Michel is mentioned in many books and it has been the prototype for the fantsy castles in the Hollywood Lord of the Rings. Nowadays the population of Mont Saint-Michel is 40 people. And it is visited by over 30 million people from all over the world. The tourist flow gets lower in the fall so we will have the chance to become familiar with the beauty of this unique place without the tourist crowds.